Stephanie, my wife, and I went to Seagrove Beach, Florida on our one year anniversary in 1994.  One afternoon, we decided to drive down to the center of the cultural world on the Florida panhandle…Panama City Beach.  You can find just about anything you want in PCB.  And everything you want is at Alvin’s.

Alvin’s is a cross between WalMart, Stuckey’s, and the Flora-Bama Lounge.  Alvin’s has alligators, t-shirts, flip-flops, boogie boards and the PCB staple – air brush artists.  Steph and I thought it would be a great idea to capture the moment of our first anniversary with the classic, deep south (I won’t say ‘redneck’ because I’m from South Georgia and that is actually a complement) airbrushed car tag that says “John (hearts) Stephanie”.  The more we thought about the reality of riding around any city with that tag on the front of our car, the more we hesitated.  So we went with Plan B…the cartoon illustrator.

Now, let me make a few comments as I share this image with you.

Finally, what strikes me most is the way the illustrator captured our “image”.  I’ve always been amazed at how it really captured the essence of who we were (and are).  In some ways, the image captured in 1994 is still who we are…and in other ways its hard to believe it is us.  I am glad that our “image” was captured and I’m glad I still have this picture.  If you ever want to see the actual picture, stop by my office sometime…it’s hanging on the wall. 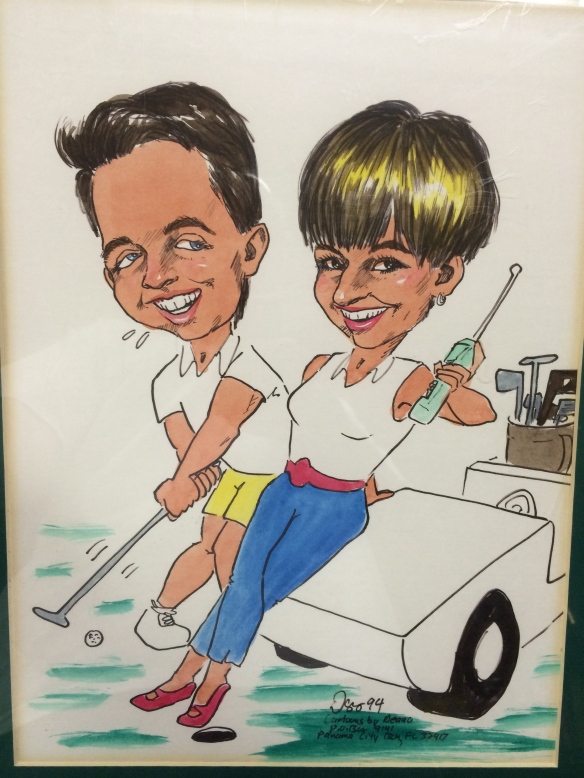